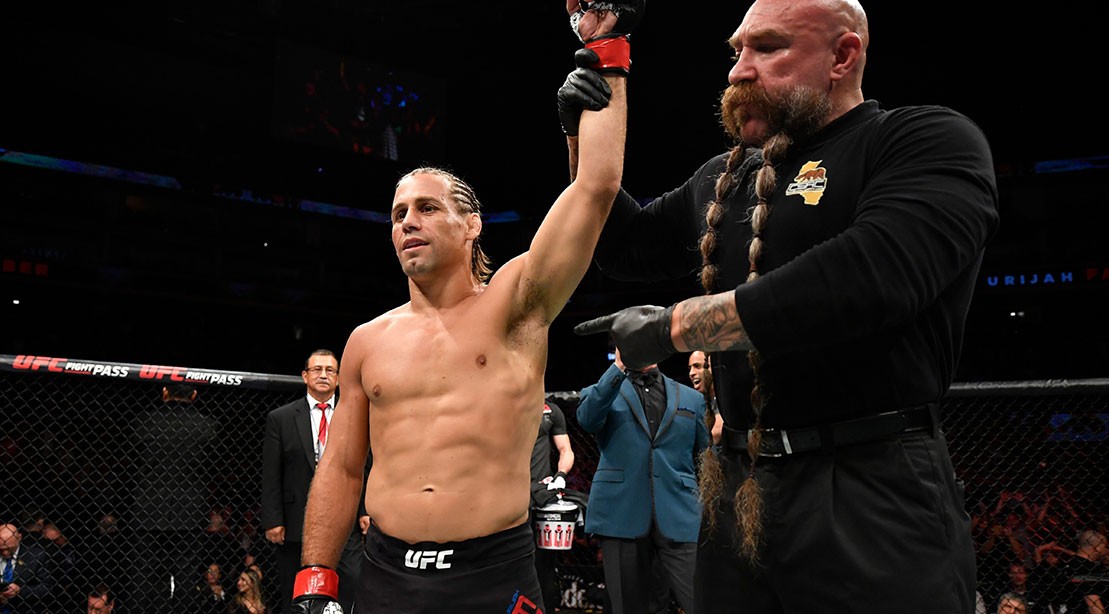 “Easygoing” and “jovial” aren’t words you’d typically think of to describe someone who spends their days dominating other MMA fighters, but those are the first words that come to mind after talking to UFC star Urijah Faber. Although, that shouldn’t be too surprising—after all, Faber has a lot of be happy about right now. After two and a half years out of the Octagon, Faber, who recently turned 40, made his UFC comeback in July in stunning fashion, knocking out Ricky Simon in just 46 seconds. To top it off, he got to do in front of a crowd in his hometown of Sacramento, CA.

It was a massive victory for Faber (35-10-0), who was a +275 underdog going into the bout against the 26-year-old up-and-comer Simon (15-1-0). In less than 60 seconds, he proved that wisdom, dedication, and the right attitude beat out youth (and Vegas odds), and became the first UFC fighter to win a fight after being inducted into the Hall of Fame.

Muscle & Fitness caught up with Faber, who was still riding high on his recent victory, but was already busy making big plans for his future.

What made you decide to come back to the UFC?

The reason I stopped fighting initially was because I wanted to give myself a break. I wanted to see how I’d feel without the pressure of a fight, and there were a lot of things I wanted to focus on outside of fighting. Your mental game is super important, so when you start thinking about retiring, it’s a sign you should probably retire. The timing felt right, which was actually the same reason I came back.

It’s a new time in the sport where a lot of big things are happening. In my time off, I found myself staying in the gym being involved in the sport. My favorite way to work out is by doing jiu-jitsu, so I was always in there tumbling with the young guys anyway. Then I started doing some Brazilian jiu-jitsu competitions, and I said to myself, “I want to fight.” I thought it, I felt it, and I went after it.

How did you prepare for your fight against Ricky Simon?

The hardest part of getting back into a fighting regimen is that you’re sore all the time. You’re beat up, you’re definitely going to get injuries, you’re going to bleed every day, and you’re setting yourself up for a tough life. I had done that for over 20 years, so when I decided to take the time off, that was one thing that was really nice. I didn’t have to push when I didn’t want to or train through adversity and injuries.

So, getting back into the mix was something I eased into pretty far out. When I learned they had the [Fight Night 155] card in Sacramento, I decided to pull the trigger.

You mention being sore all the time; as you enter your 40s, how are you staying strong and injury-free?

The biggest thing for me is the lifestyle I was brought up in. My parents have always been into health and wellness. Since I was a kid, I’ve been taught to rely on natural remedies like bee pollen and royal jelly and wheatgrass-carrot-beet juice, not medicine.

I’ve also always stayed fit. My body hasn’t changed much since I stopped fighting. To prepare for this fight, I went back and watched my old fights and sparring sessions, and realized that my current training isn’t much different. It’s been about maintaining a lifestyle of health and wellness and being very active.

What are some nutritional rules that you swear by?

First and foremost, I try to eat the best quality of everything. There’s ice cream, hamburgers, salad, and then there are different quality levels for each of these things. I have a relationship with Trifecta as a partner in the company, and that’s helped out a lot. We have a partnership with Renaissance Periodization, which is a program that designed my meal plan as well.

The biggest thing is having the right fuel and understanding when to eat it. The meal plan from Trifecta delivers organic, ready-to-eat food to your doorstep so you don’t have to worry about meal prep. They also run the UFC / Trifecta Fight Prep program which helped me during my weight decent before the fight. I’m already knowledgeable about when I’m supposed to eat and what I’m supposed to put in my body, and Trifecta makes sure I have all the fuel ready for me to execute at the right times.

I focused on nutrition even more in retirement because I was an athlete for over 20 years. You’re used to burning so much and eating so much, so I had to really dial in my diet and eat better to maintain my health after retiring. 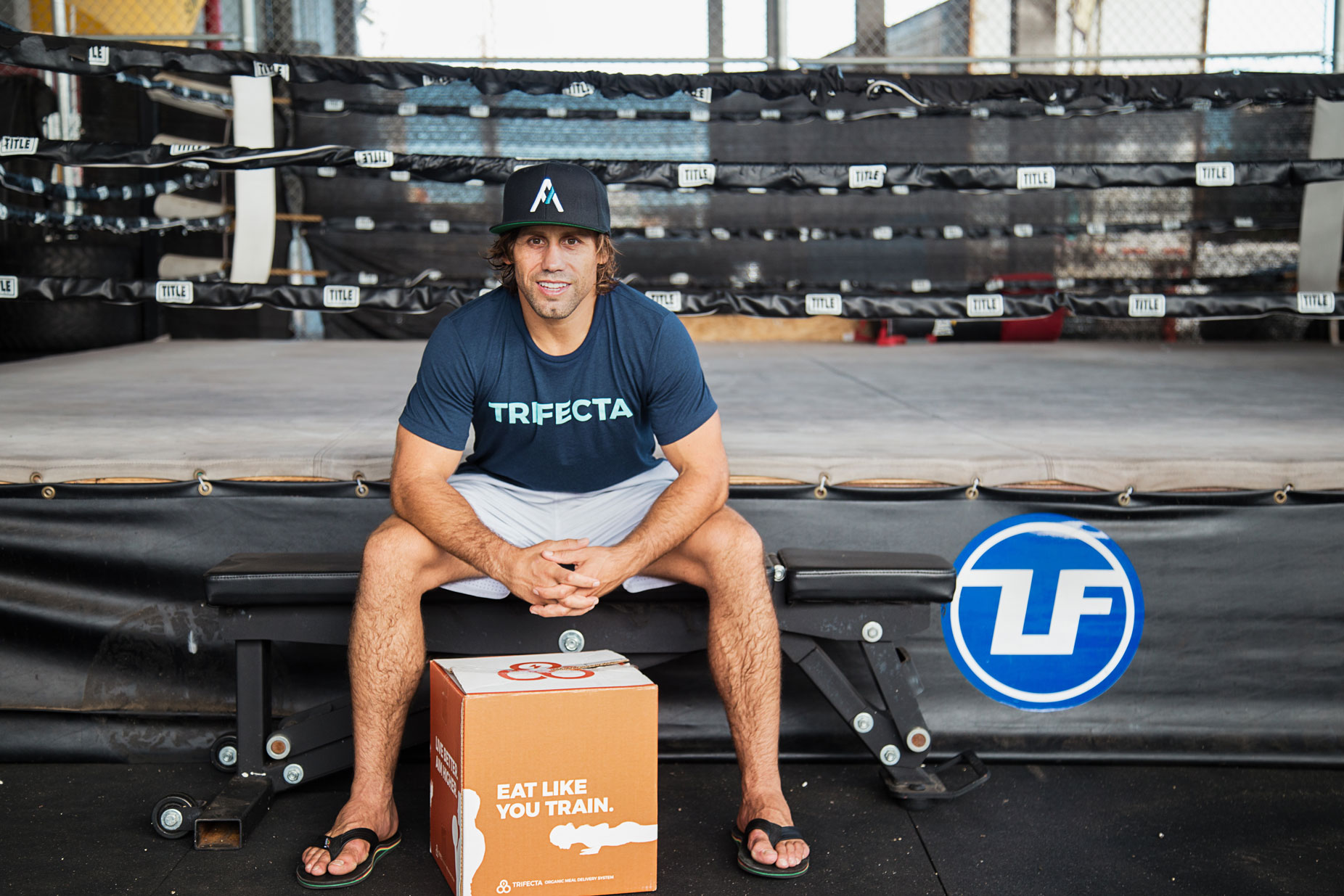 What is your goal in working with Trifecta?

We want to feed the nation and help people manage their health and fitness, as well as help athletes reach their goals. The business is booming, so we’re looking for new ways to help it grow and bring the best fuel to the most people in the easiest way possible.

It’s cool to be with a company from the early stages and see the way it’s affecting people. It’s so cool to have a relationship with the UFC—Trifecta takes the knowledge and the fuel, and puts it all together so fighters don’t have to think about their nutrition. I’d like to do that with more sports organizations. We’ve got the PGA tour, the Olympia Weekend, and CrossFit. I’d like to see us move into more mainstream sports like the NFL, NBA, and MLB as we progress.

How did Trifecta help you dial in your nutrition for your comeback?

There are different ways to do it: You can have meals or you can have bulk food. I would have bulk salmon, bulk tuna, bulk turkey burgers, and bulk chicken always onsite at my house. Then we also have meals we deliver to the gym that are fast and have exactly what you need in them.

Then Renaissance Periodization helped me design a plan. They have their experts putting together meal plans for your needs. So, when I had to cut weight, I had meals delivered to me with what snack to eat at what time. They had it all planned out for me. It was pretty amazing.

Now that you’ve made such a huge comeback, what are your plans for your career now?

The plan is to find the fight that makes the most sense. Henry Cejudo is the current UFC world champion and he called me out after his last victory. I answered the call with a big win, and now I’d love to see that fight happen.

He’s one of the best in the world, and that’s why you get into this sport—that’s why you test yourself at the highest level. For me, fighting the current world champion in my weight class, who’s also been to the Olympics as a wrestler and won a gold medal, would be amazing.

To prepare for a title fight, do you turn up the intensity?

I fought for the championships a lot in my career and I’ve held the world championship, so I’m not a stranger to it. I’ve become a top contender and a world champion and a Hall of Famer because I’ve treated every fight as if it were a championship fight.

Part of what’s made me stand out throughout the years is that I’ve juggled a lot. It’s always been a quiet criticism of whether I’m taking on too much throughout my career, but I just feel lucky to have the support that I have and the ability to work with companies like Trifecta. It makes life easier and makes sure that my time, my energy, and my nutrition are all being used in the best way possible.

You do individual training for the specific fighter, but at the end of the day, it’s all about what you’re going to put out there when you’re in the Octagon. It’s been a long road as a mixed martial artist, and I’m just enjoying it. 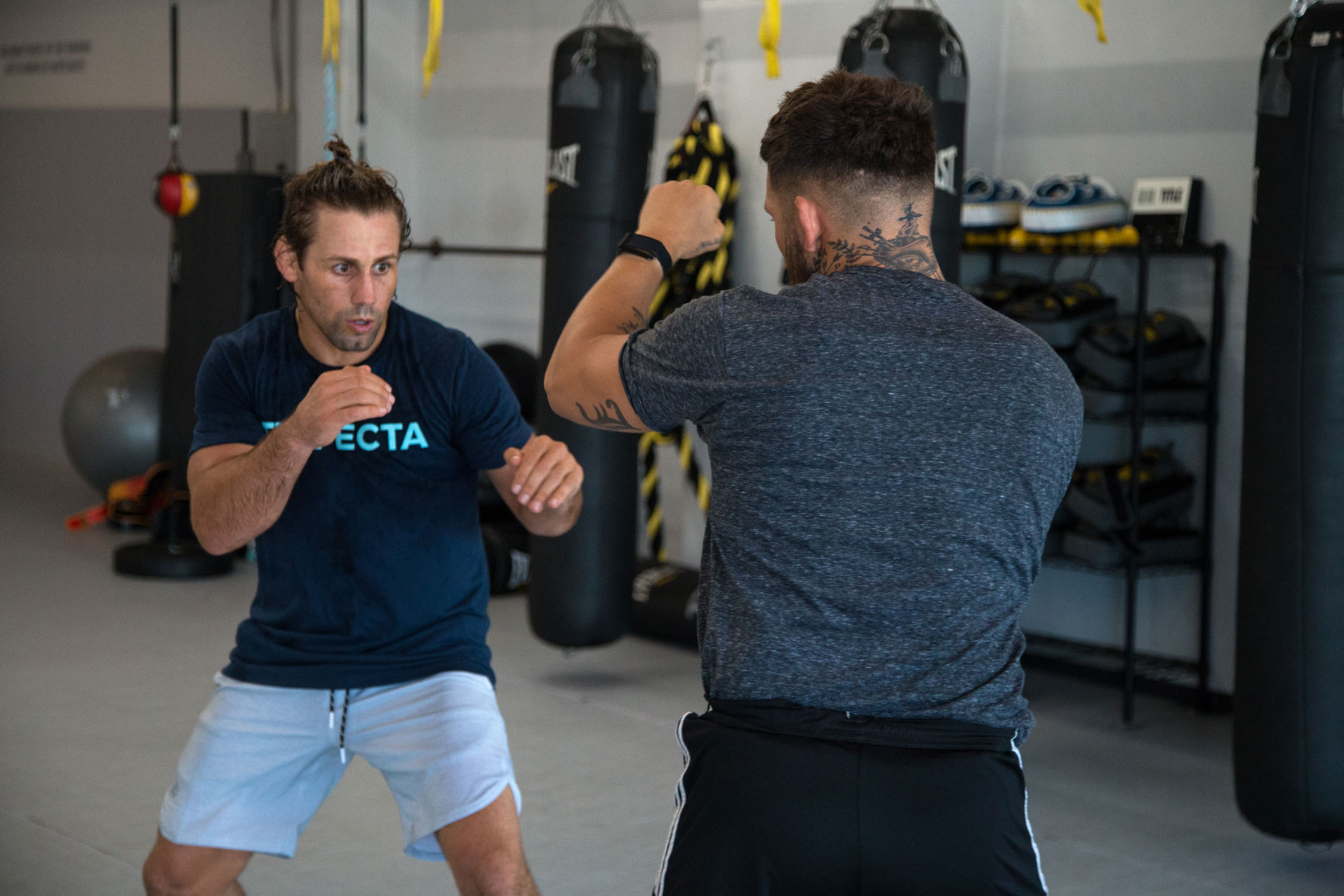